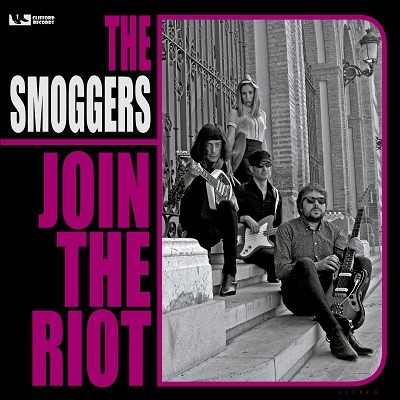 SMOGGERS, THE - Join the Riot

When Fernando asked me if I would write a little something about the new Smoggers record, I told him that I would have to hear it before I could give any reports on this new record. Which always has the possibility of receiving less than positive feedback, usually in this case the band or whoever just doesn’t use it. I tell the truth even when I lie . . . Well I’m happy to report that after receiving the album I was able to listen to it and now I can give you a quick report on The Smoggers new LP, Join the Riot. If you dig fuzz, reverb, teenage type anguish , and howls at the moon, then this record is right up your alley. With the mix of good ole “garage punk” stylings and 60′s power pop, these songs will please fans of Nuggets, Pebbles, Back from the Grave, etc . . .I must say I was a bit surprised that this band comes from Espana as to my ears they sound like classic mid Sixties Texas Punk , and Eighties American Garage. Especially some of the tracks with organ and Tasty fuzz guitar riffs remind one of The Pandoras, Cynics, and early Fuzztones . Also dig the vocals , also nice backing vocals. The reworking of some classic songs are quite nice IE: “Wild Man” with its vocal ala Holly Golightly . . . Nowadays everyone says how much easier it is to find “underground” music, ( for lack of a better word ). . . Why search in small record shops and fairs? Why go to local shows and support the bands, the scene, the whatever… Why meet like minded people and share music? Is it really easier to just Google it? So I can report that I found a “Diamond in the Rough” and that I keep humming certain songs. So if you dig music that is created with love, passion, blood, sweat, and piss , this will be a nice addition to your collection.. I’m under the impression that this is one of those records that sounds really bitchen on the car stereo , at 100 mph, with a full tank of gas . . . On that note I’m grabbing some beers , doing a couple of shots of tequila, hit the joint, kiss Mama on the Cheek and out the door . . . Cause I’m about to Join The Riot!!!
Leighton Koizumi (Gravedigger V, Morlocks)