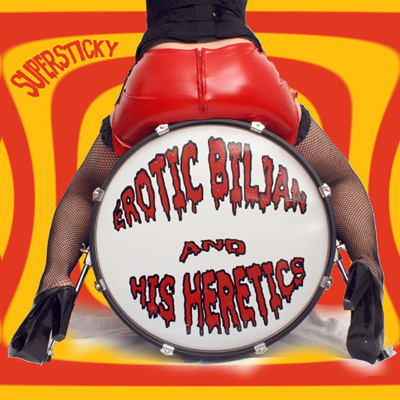 "The songs and the sound, wild vocals, pumped up guitar duels rich with wah-wah, fuzz and feedback, pumping rhythm section and unrestrained blues harp attacks, plus a saucy, trashy cover, everything here fits the garage rock and punk canon - all the rules have been followed and the result is a fun and entertaining album, while the poduction in an Austrian studio didn't soften it but gave it even more edge. The band, when on a roll, has become a synonim for the furious r'n'r performances in the underground club rock milleu. This is the r'n'r that most Croatian bands don't know or can't play. Their debut can be compared to the Scandinavian garage-rock albums, and since we know that the Scandinavians rule the genre, this should be quite a big compliment…" .
Aleksandar Dragas - SUPERSTICKY debut album review

“ "It bursts, pops and hits you directly in the head that you simply can't ignore it… MC5 meets The Sonics, a new old generation."”
Ana Bjelic - DOP magazine, SUPERSTICKY debut album review

"If you don't fall for a super sexy cover (where have all the LP's gone…), you will definitely fall for the high quality garage rock. The band gives us screamadelic garage rock and roll in high doses, but the audiences in Spunk and similar places have already been enjoying that for a few years now. Rock is alive and kicking, The Heretics are wild and strong, and we won't give them the fifth bunny only because you have to check them out live! " Rating: 4 bunnies'
PLAYBOY, Croatain Edition, September 2007 - SUPERSTICKY debut album review